If you run a quick google search of earning opportunities for single parents, most articles that come up would be aimed at single moms. Maybe the reason for this is that there are more single mothers than there are single fathers. This may be true, but regardless of how little the population of single dads is, they are not free from the tolls of their situations.

And just like any other topic that relates to males, the emotional side of it all gets overshadowed by other matters. Despite all the progress the world has made about gender relations, so many guys still find it hard to open up about their emotional struggles. Truth be told, the progress made both for the freedom of men and women is still so little compared to all the things left uncovered.

The emotional struggles of being a single father

They rarely get appreciated

This is not to stir any competition between single moms and single dads. But again, maybe there are more single moms out there. Or maybe it is even tougher for women to be single parents due to their position in society, so they deserve all the “superhero” nicknames that they get.

However, sometimes, all that a tired dad needs is a pat on the back and a simple sentence that tells him he is doing a great job. Compliments are hard to come by for men. It’s all due to the ridiculous expectations the patriarchy has made up. Men are strong, and they do not need compliments.

They are doing their very best to provide for their kid while trying to be a present parent. That is such a great feat that deserves appreciation.

They don’t get the support they need

Rarely getting compliments and being expected to handle things alone are not things that magically happen. The first time a boy was told to man up or to stop being a baby was the day he was silently told to never show signs of struggle ever again.

Guys are conditioned to shut down their emotions. Asking for help is related to weakness. And weakness should not exist in a man’s vocabulary, according to some ridiculous standards.

Asking for help is accompanied by shame which should not be the case because humans are not cut out to be great at everything. As a result, they suffer alone. They don’t reach out for help even when it gets exhausting. On the other hand, people around them wouldn’t usually assume they need help.

Ways to help you through the struggle as a single dad

Be okay with being vulnerable

It’s tough to unlearn all the macho facade you’ve been practicing since childhood, but you should know that it pays not to hide you are having a hard time. Accepting and working around your vulnerabilities will open so many doors for you.

One, you can ask for help. Establishing a support network will significantly help you in your journey. Ask friends for help. Tell them how you’ve been handling things so far. Tell them you need guidance. Once you open up, you will be surprised by how willing people are to help you.

You can do it slowly. Use the internet to your advantage. You can join forums where other single dads like you help each other out. You can even start with anonymous posts and questions.

By joining a group like this, you will learn that you are not alone. You can even get practical advice from them. They can point you to financial opportunities.

Some of them have been single fathers for a long time now and have experienced leaving a job, saving up enough money to afford the costs of opening a grocery store or any other business. They can tell you what to do when your child gets sick. You can also get information on the best diaper brands or anything related to raising a child.

Make time for yourself 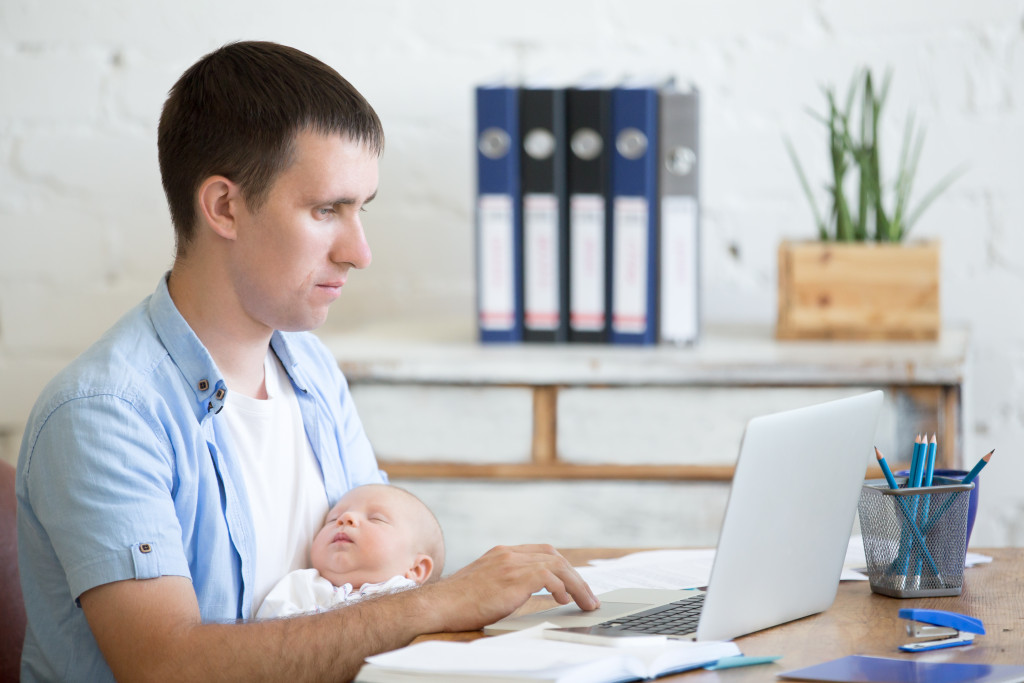 Self-care is not something grand that you need to spend hours or loads of money on. It can be simple like taking a relaxing shower. Put on your favorite movie while your baby sleeps. Go to the gym while they are in daycare. Get enough sleep and make sure you are getting in three meals every day.